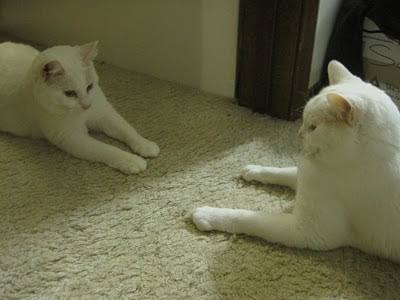 Sadie, on left, at the entrance to her "quarantine" room and Angel, on right, sitting just outside the room. We opened the door, knowing that Angel was patiently sitting in the hallway. Sadie came out tentatively and quickly backed up when she saw Angel. Hubby decided to use the laser pointer to catch their attention and brought them within a few inches of each other. When he turned off the pointer both cats stayed in their positions, watching each other. As you can see, Angel looks a bit wary and is pulling back as he watches Sadie. Within a couple of minutes Angel disappeared down the hallway and we thought the introduction was over. But after a few more minutes passed Angel returned and went straight into the spare room to check out Sadie's digs. We let him walk around the room with Sadie following at a safe distance. Angel was curious but obviously was still being careful since we saw him slowly putting one foot in front of the other, barely putting any weight on each foot. Once he was done the circuit of the room, he decided he was done and hot footed it out the door.
Posted by Mama Bear at 7:38 PM

Sadie actually looks interested! I'm betting Angel will warm up to her soon, if they relaxed enough to play next to each other.
LOL @ the slow walk...I know just what that looks like!

So far, so good! And apparently no hissing or grumbling has taken place...it's looking good! I can't wait to hear all about how she bosses those boys around!

That is a great beginning!!! It is also a good idea to give them treats together when doing the introductions (hopefully they like treats...Casper doesn't. Maybe next time after luring them close with the laser pointer, put a couple of treats down in front of each cat and they can enjoy them at the same time...this fosters "good feelings" about being together :-)

Yes, this is what kitties seem to like to do when the other cat is strange. Just sit at a distance (this one is rather close) and stare at them. 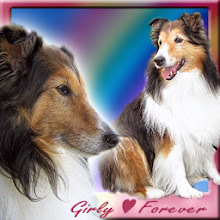 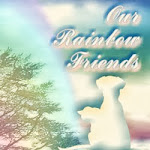